You or your loved one may have received a diagnosis and be wondering “What is scoliosis?”  Scoliosis is not a disease like diabetes or arthritis. It is simply a term used to describe any abnormal, sideways twisted spine or backbone. 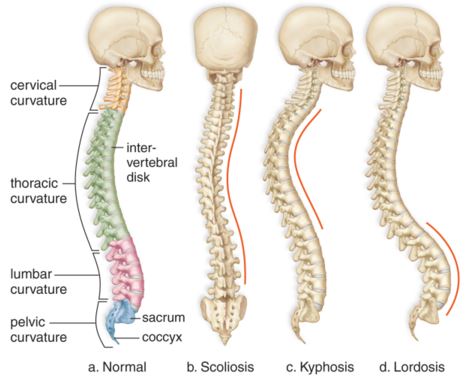 Scoliosis is a sideways curvature of the spine. These curves can be seen when the spine is viewed from the front or back.  In most cases of scoliosis the bones of the spine twist on each other, forming a “C curve” or an “S curve” shape in the spine. It may or may not be noticeable to others. Read more about the different Types of Scoliosis >

What is the history of Scoliosis?

Hippocrates, the ancient Greek physician, first wrote of spine deformity in 460 B.C.  Nearly 500 centuries later, in the second century A.D., Greek physician Galen introduced specific terms for normal and abnormal spinal curves, including the term Scoliosis, into medical terminology. The word scoliosis comes from a Greek word meaning crooked. The term scoliosis refers to a crooked back or crooked spine. Keep in mind that curves are a completely normal feature of the spine when looking from the side, but the spine should appear straight when looking from the front.

In 1920, a report from the United States Army estimated around 10% of American World War I draftees had postural deformities. As a result, the US Children’s Bureau, US Department of Labor, and US Public Health Service all began to sponsor research and publish literature in an effort to improve Americans’ posture. The Metropolitan Life Insurance Company also required all of its applicants to undergo posture screening and created promotional literature such as The Importance of Posture (1927), Posture From the Ground Up (1939), and Standing Up to Life (1950).

What are the signs of scoliosis?

The most noticeable signs of scoliosis are physical asymmetries caused by spinal curvature, including: 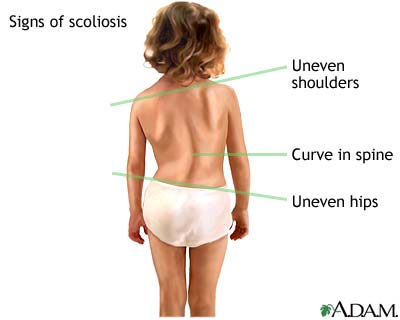 Scoliosis is often first noticed by a friend or family member. Changes to the spine occur gradually and do always cause pain, so it may go unnoticed by the individual. Scoliosis also commonly detected during a routine school screening examination. During this test the doctor or school nurse performs the Adam’s Forward Bend Test, in which the child bends forward as if touching their toes. Once signs of scoliosis are detected, a proper diagnosis should be made by a doctor who specializes in condition. Physicians use medical and family history, physical exam, when checking a person for scoliosis. An x ray of the spine will confirm if a person has scoliosis. The scoliosis x ray lets the doctor measure the curve in degrees and see its location, shape, and pattern.

What are the Symptoms of Scoliosis?

The most common symptoms of scoliosis felt by patients include:

Read more about Symptoms and Signs of Scoliosis >

In many cases scoliotic curves will not cause pain. In a significant percentage of patients any pain associated with their scoliosis will get worse as they age. Treatment is always designed to alleviate pain first (if any pain is present), then stop curve progression, reduce curve size and then stabilize the curve corrections.

The causes of scoliosis or the most mart remain a mystery because in most people, there is no known cause for scoliosis. This is known as idiopathic scoliosis.

Idiopathic scoliosis is the most common type of scoliosis seen in children. Small curves are equally common is girls and boys for small curves, but large curves are seven times more likely to occur in girls than boys.

Scoliosis can present in people of all ages. It can be found in very young children from the time of standing to walk, but it is most common in those over 10 years of age. Studies have shown that 4 out of every 100 people have some form of scoliosis.

Scoliosis can run in families which has led researchers to conclude there is a strong genetic component to the origins of most scoliosis. A child who has a parent, brother, or sister with idiopathic scoliosis should be regularly screened for scoliosis.

Read more about Scoliosis and Genetics >

How is scoliosis treated?

There are a variety of scoliosis treatments.  Including

At Hudson Valley Scoliosis we offer proactive non-surgical scoliosis treatment.  We take a combined approach using the latest advances in scoliosis exercises and bracing. By doing so we have achieved excellent results reducing pain, improving posture, and reversing scoliosis curvature in both children and adults.

Tagged with: adolescent idiopathic scoliosis, crooked back, scoliosis, twisted spine, what is scoliosis, whats scoliosis
Posted in About Scoliosis

6 comments on “What Is Scoliosis?”