Scoliosis is not a disease. It is a term used to describe any abnormal, lateral (sideways) curvature of the spine. As these curves present in different ways, there are different types of scoliosis. Viewed from the back, a typical spine is straight. If the spine curves, it can show up as a curve to either side; as a single curve shaped like the letter C or “c-shaped scoliosis” or as a double curve shaped like the letter S or “s-shaped scoliosis”… rarely the curve can be a triple. To learn more about different types of scoliosis, continue reading or use the table of contents to jump to the section that interests you.

Dextroscoliosis: When viewed from behind, a spinal curve to the right is called Dextroscoliosis (“dextro” means right). Usually occurring in the thoracic spine, or a “Thoracic Dextroscoliosis” and sometimes the lumbar spine, or a “Lumbar Dextroscoliosis.” It is the most common type of curve and can be seen it can be seen in both children and adults. It can occur on its own (forming a c-curve) or with another curve bending the opposite way in the lower spine (forming an s-curve). The reason dextro is most common is that the body instinctively avoids the heart which is located to the left of the midline of the torso. 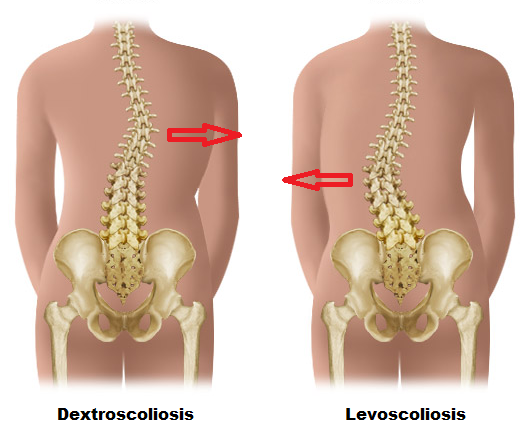 Kyphosis: Kyphosis is a curve seen from the side in which the spine is bent forward. There is a normal kyphosis in the middle (thoracic) spine.

Kyphoscoliosis: Kyphoscoliosis is the abnormal curvature of the spine, both sideways and towards the upper back.

Lordosis: A curve seen from the side in which the spine is bent backward. There is a normal lordosis in the upper (cervical) spine and the lower (lumbar) spine. Infantile Idiopathic Scoliosis: Infantile scoliosis is defined as scoliosis that is first diagnosed in a child between birth and 3 years of age. 80% of scoliosis in infants will resolve without treatment. Those that do not resolve can be difficult to manage. Frequent checkups are needed and if progression is seen, aggressive non-surgical treatment must be started. There is currently a variety of invasive surgical methods such as stapling or the insertion of expandable rods used for treating infantile scoliosis.

Juvenile Idiopathic Scoliosis: Juvenile onset scoliosis is defined as spinal curves diagnosed between ages 3-10. It is less common than adolescent scoliosis but still makes up one-fifth of scoliosis cases.

Adolescent Idiopathic Scoliosis: Adolescent idiopathic scoliosis occurs in children age 10 to 18 years, and comprises approximately 80% of all cases of idiopathic scoliosis. This age range is when rapid growth typically occurs, which is why scoliosis in teenagers should be monitored closely for progression as the child’s skeleton develops.

Adult Idiopathic Scoliosis: Once skeletal maturity is reached, a patient with adolescent idiopathic scoliosis is now said to have adult idiopathic scoliosis. A patient with Adult Idiopathic Scoliosis will greatly benefit from treatment for progression. Pain is a common reason for treatment. Normal degenerative changes of the spine may be accelerated by curvature and the patient may be at higher risk for skeletal pain or extremity pain due to nerve compression.

Adult-Onset Scoliosis: Not to be confused with adult idiopathic scoliosis, adult scoliosis or adult onset scoliosis is a degenerative scoliosis, or a side-to-side curvature of the spine caused by degeneration of the facet joints. Degenerative scoliosis occurs in older adults, most frequently in people over age 65. Typically a C-shaped curve forms in the lumbar spine. It can occur due to arthritis in the spine, Spondylosis. Weakening of the normal ligaments and other soft tissues of the spine combined with abnormal bone spurs can lead to an abnormal curvature of the spine. The spine can also be affected by osteoporosis, vertebral compression fractures, and disc degeneration. This pain causes people to lean to one side to reduce pressure causing spinal deformity. Degenerative scoliosis is the most common form of scoliosis in adults.

Other types of Scoliosis Classification

Structural scoliosis: Is a fixed curve treated case by case. If the curve is present at birth, it is called congenital scoliosis. Structural scoliosis can be cause by birth defects (such as hemivertebra, in which one side of a vertebra fails to form normally before birth). It can also be the result of injury, certain infections, tumors (such as those caused by neurofibromatosis, a birth defect sometimes associated with benign tumors on the spinal column), metabolic diseases, connective tissue disorders, rheumatic diseases. In other cases, it occurs by itself or by unknown factors (idiopathic scoliosis). Structural scoliosis can also be caused by neuromuscular diseases.

Nonstructural (Functional) scoliosis: Nonstructural scoliosis is a curve in the spine, without rotation, that is reversible because it is caused by a condition such as: pain or a muscle spasm or a difference in leg length. In this type of scoliosis the spine is normal, but an abnormal curve develops because of a problem somewhere else in the body.

Neuromuscular scoliosis: Is associated with a neuromuscular condition or a problem when the bones of the spine are formed. The vertebrae can fail to form completely or fail to separate from each other during fetal development. This type of scoliosis develops in people with other disorders, (i.e. birth defects, muscular dystrophy, cerebral palsy, or Marfan’s disease). People with these conditions often develop a long C curve and their muscles are unable to hold their spine straight.

Compensatory scoliosis: A spinal curve in the coronal plane which disappears when the patient sits. It may be caused by either a short leg or a pelvic tilt due to contracture of the hip. This type of curve will straighten significantly on side-bending to produce spinal balance. There may be no underlying structural abnormality.

This is an explanation of just a few basic terms used to classify scoliosis. If it appears complicated, it is. Don’t make the mistake of assuming you have enough understanding to self-diagnose. There are even more complicated classifications for scoliosis, such as the King and Lenke Classification systems. It’s always best to consult your physician with any questions you may have about your scoliosis diagnosis.