What is Kyphosis?
What Causes Kyphosis?
Types of Kyphosis
Diagnosis
Treatment

The thoracic spine (mid to upper back) is naturally curved outward. This is referred to as a “kyphotic curve”. However, the term “Kyphosis” can also be used to describe an excessive outward curvature in this area of the spine. Kyphosis comes from the Greek word for “hump”, therefore it is also referred to as roundback or hunchback.

The individual bones (vertebrae) that make up a healthy spine look like squares stacked in a column. Kyphosis occurs when the vertebrae in the upper back become more wedge-shaped, excessively curving the mid spine. This results in a bowing of the back, seen as a slouching posture.

While most cases of kyphosis are mild and only require routine monitoring, serious cases can be debilitating. Severe kyphosis can cause strong pain, breathing and digestion difficulties, heart strain, neurological compromise and, in the more severe cases, significantly shortened life-spans.

Postural Kyphosis is the most common type and can be found in children and adults. In childhood and adolescence it is commonly attributed to slouching and is reversible by correcting muscular imbalances.

Hyperkyphosis or a “dowager’s hump” is typically found in older patients (most commonly in older women). Hyperkyphosis can develop due to aging alone but about one third of the most severe hyperkyphosis often occurs after osteoporosis (a condition that thins and weakens the bones) weakens spinal bones to the point that they crack and compress. Scheuermann’s Kyphosis is caused by an interruption to the normal blood supply to the spinal bones and can cause varying degrees of pain. Commonly referred to as Scheuermann’s disease, it is typically seen in the mid-thoracic spine and found mostly in teenagers. Boys are affected more often than girls.

A patient with Scheuermann’s kyphosis cannot consciously correct their posture because the curved part of the spine is very rigid. The patient may feel pain at this apex, which can be aggravated by physical activity and long periods of standing or sitting. Their level of activity is significantly diminished by their condition. With postural kyphosis, the vertebrae and discs appear normal, with Scheuermann’s kyphosis, they are irregular, often herniated, and wedge-shaped over at least three adjacent vertebral levels. Fatigue is a very common symptom, most likely because of the intense muscle work required to stand and/or sit properly. The condition appears hereditary. Most of the patients who undergo surgery for kyphosis have Scheuermann’s disease. Congenital Kyphosis occurs in rare cases of infants whose spinal column has not developed correctly in the womb. The vertebrae may be malformed or fused together and can result in  progressive kyphosis as the child develops. Surgical treatment may be necessary at a very early stage and can help maintain a normal curve with consistent follow-ups to monitor any changes. However, the decision to carry out the procedure can be very difficult due to the potential risks to the child. A congenital kyphosis can also suddenly appear in teenage years, more commonly in children with cerebral palsy and other neurological disorders.

Nutritional kyphosis can result from vitamin deficiencies, especially during childhood. One example is vitamin D deficiency which causes Rickets, a softening of the bones that results in curving of the spine and limbs under the child’s body weight..

Gibbus Deformity is a form of structural kyphosis, where one or more adjacent vertebrae become wedged. Gibbus deformity can result from advanced skeletal tuberculosis and is caused by collapsed vertebral bodies. This can lead to spinal cord compression causing paraplegia, an impairment in motor or sensory function of the lower extremities.

This form of kyphosis occurs from untreated or ineffectively treated vertebral fractures. It can result from failing to manage or recognize an injury or from inadequate surgical treatment. Patients with post-traumatic kyphosis typically have severe neurologic deficits such as quadriplegia or paraplegia.

A physical examination is required, in which the doctor will check your height and may ask you to bend forward from the waist while he or she views the spine from the side. The rounding of the upper back may become more obvious in this position. The doctor will also check your reflexes and muscle strength. You will need X-rays to determine the degree of curvature and detect any deformities of the vertebrae, which will identify the type of kyphosis. Treatment for kyphosis depends on age, the causes of the curvature and symptoms. Kyphosis can cause back pain and stiffness in some people. Mild cases of kyphosis may produce no noticeable signs or symptoms.

In many older people, kyphosis is a sign of osteoporosis. Weight bearing exercise and specific forms of calcium supplements will be used to maintain existing bone density. In very severe cases, osteoporosis medication may be needed to help prevent additional spinal fractures that can exacerbate kyphosis. 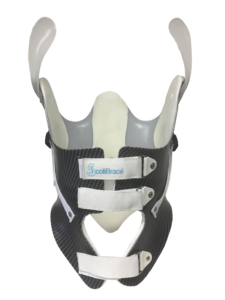 For young patients who still have some flexibility in their spine, kyphosis bracing will be part of the home-based kyphosis specific exercise program.

For older patients a similar form of bracing can be used to reduce pain and the danger of postural collapse.

If the kyphosis curve is very severe, particularly if the curve is pinching the spinal cord or nerve roots, surgery may be prescribed to reduce the degree of curvature. The most common of which is spinal fusion surgery, which connects two or more of the affected vertebrae permanently. Surgeons insert bits of bone between the vertebrae and then fasten the vertebrae together with metal wires, plates and screws. The complication rate for spinal surgery is relatively high and include bleeding, infection, pain, nerve damage, arthritis and disk degeneration. If the surgery fails to correct the problem, a second surgery may be needed.

For more information on kyphosis treatment or to make an appointment,