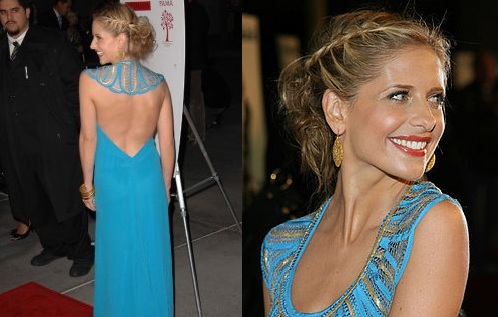 Sarah Michelle Gellar is best known for her role in “Buffy the Vampire Slayer” and most recently starred in the series “Ringer”. Gellar suffers from scoliosis but that does not deter her from wearing backless evening gowns!

“I grew up with, and I still have, major scoliosis. Growing up in Manhattan, you had your school bag, but we were so trend-conscious, nobody wanted to put a backpack on both shoulders, so almost all the girls I grew up with have it to some degree, because we all were so lopsided. So Pilates not only is a great exercise, but does relieve a lot of discomfort.”

Backpacks do not cause scoliosis. However, the extra weight placed on the back and shoulder from an overloaded backpack can cause back muscle fatigue and strain. This can also encourage poor posture and slouching. It’s important to wear both backpack straps, tightened so that it falls two inches above your waist.