Exercise for Scoliosis – Types of Muscle

This is a technical article revealing a behind the scenes perspective on why specific types of exercise therapy is so effective in treating scoliosis.

Skeletal muscle is a form of striated muscle tissue (a form of fibers that are combined into parallel fibers) controlled by the somatic nervous system (associated with the voluntary control of body movements via skeletal muscles). It is one of three major muscle types, the others are cardiac (striated heart muscle) and smooth muscle (involuntary non-striated muscle). Most skeletal muscles are attached to bones by tendons. Skeletal muscle is made up of individual components known as myocytes, or “muscle cells”, sometimes referred to as “muscle fibers”.

Type I fibers (slow to fatigue) appear red due to the presence of the oxygen binding protein myoglobin. These fibers are suited for endurance and are slow to fatigue because they use oxidative metabolism to generate energy (ATP).

Type II fibers (fast twitch) are white due to the absence of myoglobin and a reliance on glycolytic enzymes. These fibers are efficient for short bursts of speed and power and use both oxidative metabolism and anaerobic metabolism depending. These fibers are quicker to fatigue. 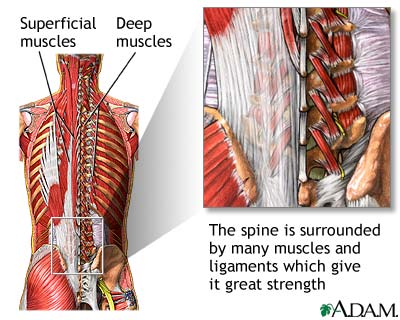 There are approximately five layers of muscle in the spine

and the deepest layers control the individual positions of the spinal bones called vertebrae. These muscles are a significantly different fiber type than the more superficial muscles in the first three layers. The deeper muscle layers are smaller, only one to three inches in length, and are mainly type I fibers that are fatigue resistant. Studies have demonstrated asymmetry of these muscles (multifidus muscles) and they are thought to contribute greatly to the twisting and tilted individual vertebral positions in scoliosis. Muscle fiber type dictates how a muscle responds to force/load principles. These deeper spinal muscles are not under voluntary control and hence NOT affected by standard isotonic exercise programs.

This means that deep muscle groupings like the multifidi serve to support the body relative to gravity and also have the largest ability to alter the structural position of a single vertebrae.

Voluntary exercise programs for scoliosis like yoga, Pilates, or Schroth fail to stop progression, fail to reduce an existing spinal curvature, and fail to reduce the number of scoliosis curvatures progressing to surgical threshold (approximately 45 degrees) because they do not engage this deeper muscle layer.

The immobilizing effect of scoliosis brace treatment decreases the deep layer muscle firing making the spine less stable and more prone to progression. In addition, scoliosis braces can create more rotation which leads to spinal rigidity and potentially more structural asymmetry in bone and discs. Scoliosis braces are often thought of as a way to hold the spine straighter but changing the muscle tone of the deeper layer muscle, ultimately the scoliosis will remain programmed by the central nervous system and no real change in the curve size takes place.

So if we look at the spine and how it functions we can see that deeper muscles are shorter and more densely populated with automatic muscle fibers to ensure upright integrity is not lost. Superficial muscles are longer and cover greater distance, gaining mechanical advantage during movement. Posture or “the spinal position” seen on x-ray studies therefore is mostly a result of intrinsic deep automate muscles which control the spines position in gravity. These muscles being automatic and not controlled by conscious signals, are not influenced by active conscious exercises, but reactive to specific kinds of stimulus (e.g. those that trigger a change in balance). Since the body has an existing program of how it aligns its center masses with gravity, and this program originates in the brain, then exercises which cause the brain to change this program are very effective in influencing the deep automatic musculature that directly controls bone position on x-rays.Neuromuscular reeducation by adding weight to change the body’s mass of the head, torso and pelvis cause the body to change its postural pattern by directing the antigravity muscle to shorten and lengthen in order to establish a new postural balance with gravity. Re-Action based exercises will ultimately have a much greater influence over a scoliosis than active exercises.

By using specific x-ray and posture analysis, the doctor can measure each individual spinal unit. This analysis can also demonstrate which portion of the body’s alignment is furthest away from gravity, either the head, torso, or pelvis. A specific amount of weight is added to a portion of the body ( head, torso, or hips) which will cause the bodies reflex control to reorganize the body masses to gravity. This reaction is done through the subconscious control mechanisms discussed earlier. As the body reorients to gravity it creates a subconscious new body image, if done correctly, this new body scheme will have much less scoliosis. After several weeks the subconscious body scheme has been altered and the patient will stand and move differently and posture, x-rays, and function will be measurably improved.

2 comments on “Exercise for Scoliosis – Types of Muscle”

The improvement I experienced the first time I was here prompted me to come back...