One of the defining signs of scoliosis is having one hip that appears higher than the other. This can lead to pain when walking or standing for long periods of time. Pain is often at the apex of the curve (where the spine curves out the most). Pain develops as a result of the ligaments being stretched due to the deformity of the spine. Also, if the pelvis is tilted from scoliosis, then one hip starts to take extra loading, eventually causing severe pain from the overuse/misuse of the tendons and musculature. The pain may subside with rest, but then returns. Scoliosis may be a symptom, rather than a cause.

Ligament laxity, in which the ligament is too loose, can also cause pain and discomfort. Sacroiliac joint dysfunction or incompetence generally refers to pain in the sacroiliac joint region that is caused by too much motion or too little motion of the joint that results in inflammation of the SI joint, and can be debilitating.

The pelvic girdle is made up of the iliac bones and the sacrum (tailbone). The sacrum connects on the right and left sides of the ilia (pelvic bones) to form the right and left sacroiliac joints. Two major ligaments hold the sacroiliac joints together: the iliolumbar ligament and sacroiliac ligament. The iliolumbar ligament stretches from each iliac crest to its adjacent fourth and fifth lumbar vertebrae, bilaterally. The sacroiliac ligament stretches from the sacrum to its adjacent iliac bones, bilaterally. 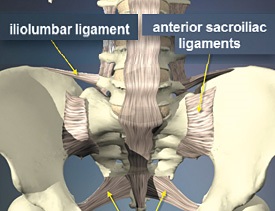 Strain and sprain of the iliolumbar ligament and sacroiliac ligament of the sacroiliac joint are common causes of low back (lumbar), sacral, and other pelvic pain. Sprain to these ligaments is usually due to postural wear-and-tear or traumatic injury (e.g. car accident, sports injury, fall). Sacroiliac joint ligament sprain injuries are typically bilateral, though pain may be more pronounced on one side of the lower back .

Pain in the lower back related to sacroiliac joint ligament sprain is commonly accompanied by misalignment of the sacroiliac joints (usually bilateral), other pelvic bones and joints and/or the lumbar vertebrae.

Low back pain from sacroiliac joint dysfunction can be localized directly over the most problematic sacroiliac joint or both joints. Pain can range from dull aching to sharp and stabbing and increase with physical activity. Symptoms can become worse after prolonged positions (i.e., sitting, standing, lying down). Bending forward, climbing stairs, walking up a hill and getting up from a seated position can also cause pain. Pain in the leg, groin and hip is referring or reflective pain, where the pain is felt in these areas instead of the site of the injury. Often, the ligament pain of SIJ sprain injury spreads or projects in a shooting, radiating pain pattern that can often be confused with neuropathic “sciatica” of degenerative disc nerve root compression. Increase pain during sexual intercourse and menstruation has also been reported in women. Severe and disabling sacroiliac joint dysfunction can cause insomnia.

A functionally short leg accompanied by a slight limp and leg abduction weakness can be a sign of compensatory scoliosis. If your legs are two different lengths a shoe lift could correct the pelvic tilt and therefore ease some of the extra loading and alleviate some pain.

A 2006 study observed pelvic asymmetry associated with either C-type or S-type scoliosis and found apparent leg-length difference in 87% of the patients studied.

Sacroiliac joint sprain treatment usually involves treatment of a simultaneous lumbar ligament sprain. A sacroiliac belt may help reduce pain by stabilizing the sacroiliac joint to help maintain reduction of the misalignment and keep the joint in place between treatments.

The presence of a functionally short leg would require treatment with an orthotic device.

The pain associated with sacroiliac sprain injury can mimic that of neuropathic sciatica caused by degenerative disc disease. Only a thorough physical examination with x-rays can distinguish between the various causes of pain. If severe symptoms are the result of both severe sprain injury and disc compression, definitive neurological testing and surgical consultation may be necessary.

What I liked most about Hudson Valley Scoliosis was the website—and speaking with Dr...