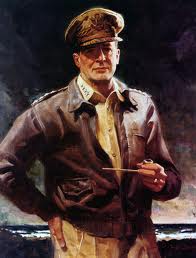 “He had the grades to qualify for entrance to West Point, but when he went for his preliminary physical examination, he received shocking news. The doctor informed MacArthur that he had curvature of the spine and was medically unfit to enter West Point.

Douglas was flabbergasted by the news; after all his sports record was excellent. He hardly knew what to think about his future; but his mother knew just what to do- a medical problem would not keep her son out of West Point, not if there was a way to cure it. She encouraged Douglas not to give up and made an appointment for him to see Dr. Franz Pfister, a well respected surgeon in Milwaukee, Wisconsin.
Dr. Pfister told Douglas there was a possibility he could cure his spinal problem, as long as Douglas was prepared to do special scoliosis exercises everyday and follow all of his instructions for one year. Douglas jumped at the opportunity and made plans to move to Milwaukee…..By 1897 Douglas and his mother were living in the Plankinton house and the rehabilitation on the spinal condition had begun. Douglas worked with Dr. Pfister everyday. Stretching and twisting his back muscles and lifting heavy weights……Even when his muscles ached and his back felt like it could not stretch another inch, he kept up his daily exercise program……
(following his 2nd medical entrance exam into West Point) The doctor who conducted the exam saw that while he made great improvement, Douglas’ spine still wasn’t straight enough to pass. At first he was angry his back was not straight enough, especially since he had worked so hard and done everything Dr. Pfister told him to. But, as he walked he calmed down and asked himself what he wanted to do with his life.
Somehow he remained sure his destiny laid with becoming an officer in the Army. “So I didn’t make it this year” Douglas told himself, “but the good news is the exercises are working and my back is getting straighter. If I work twice as hard this next year, I bet I can get into the next class.” (at West Point)
Once again Douglas threw himself into Dr. Pfister’s exercise regime……In May of 1899 he passed his physical exam into West Point. It had taken two years longer than he would have liked, but that didn’t matter now, because he was accepted into West point.”

My daughter is at the age of 14 years young and we’re from South Africa....